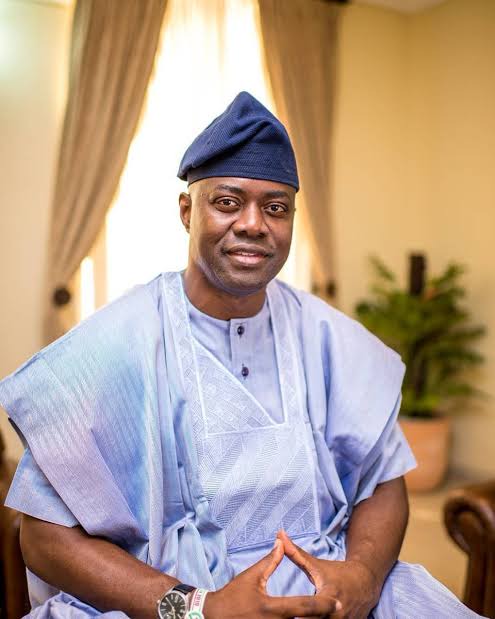 The Governor made the declaration while attending the 80th Annual General Conference of Cherubim and Seraphim Unification Church of Nigeria, held at Ashi, Orita Bashorun, Ibadan.

He equally reiterated the determination of his administration to ensure a peaceful, safe and secure Oyo State. The Governor also call for more prayers for leaders in positions of authority by religious leaders across the faiths.

He said: “I was with the Inspector General of Police yesterday and we had close to 30 minutes deliberation back and forth on how to make our State and country secure.

“We also discussed on how Amotekun is not supposed to replace the function of the Nigerian Police and the community police they are setting up. They are to complement those efforts to make our society safer. Very soon, we will begin to reap the reward of OperationAmotekun.

“All the issues before us are being addressed right now; Amotekun is definitely here to stay.”

He further stated: “I will continue to work for the benefit of all to provide a peaceful, safe and secure State where we can all worship without fear. All of us cannot worship God in an atmosphere of fear. I am happy that Amotekun, the regional security outfit to which Oyo State subscribes to, is shaping up brilliantly.

“Today is not for proverbs, it is a day for speaking clearly and openly about the role that religion and worship play in our lives. As I am standing before you today, Oyo State needs prayers. Some elements have threatened to disrupt the peace of local government councils so that a state of emergency can be declared in the State but with our prayers, their plans will not come into fruition.”

The Governor commended the Church for the continuous prayer for the success of his administration and urged them to have deliberations on how the Church would move forward.

“This year’s annual general conference theme “Enlarge The Place Of Thy Tent” as taken from Isaiah Chapter 54 verse 2, is a testament of how God blesses his people and continues to bless them with growth. I heard about the conference that was held last year in Lagos and how it made waves. I have a message for you; last year, you made waves in Lagos but today, you are in the Pacesetter State. So, by virtue of the fact that this conference is taking place in Oyo State, I believe it will create a benchmark of how future conferences will look like. Not just in terms of attendance but miracles that will occur while the conference is going on.

“The Bible records that where two or more gather in God’s name, God is there with them. If God will be with two or three, how much more will he be with a multitude that is here. So, God is definitely here with us. My message to you this day is that you may hold fruitful deliberations and conversations that will move this church forward.”

Governor Makinde charged everybody to see themselves as one irrespective of the religious differences and pledged to take the dividend of democracy to the door steps of all and sundry.

“When I was on the campaign trail, seeking to be the Governor of Oyo State, I fellowshipped with you and spoke to you about my dreams for this beloved state. Today, I am thankful that we are here through the efforts of our numerous people across all faiths. This actually tells us something; that all of us, irrespective of our religion, want good government. That was why you voted for me. All of us want to live a good life and desire the development of our communities, local councils, State and Nigeria. So, we must not allow religion to divide but unite us.”

Speaking on the local government crisis rocking the State, the Governor said: “The LG dissolution case is before the court. There is a court injunction against the people who are trying to foment trouble. For me as the chief security officer, we will definitely not allow lawlessness.”

Speaking earlier, the Supreme Head of the C&S Unification Church Worldwide, Dr. Solomon Adegboyega Alao, called on the National Assembly to immediately amend the Constitution to ensure that general elections are held in November such that all legal entanglements would have been resolved before the inauguration of the President and Governors in May.

According to him, it does not make sense to elect a Governor only to have him removed six months after.

“Now that all petitions have ended in courts, I think the government should consider a constitution amendment to ensure that elections are held in November so that all the cases would have been disposed of.

“It doesn’t make sense to elect a governor and five or six months after you have him removed,” he said.

Wike Meets Secondus, Others, Promises To Remain Committed To PDP

2023: Former President, Goodluck Jonathan Explains Why Leader Can Be Called Upon To Rule Again After Losing Election

Anthony Joshua Confirms His Mega-fight With Tyson Fury In June